The show is finally getting past the chaff and onto the actual contenders for a relationship with Becca. This week they went to Vegas and I realized I don’t know where they were before. I’m pretty sure they begin in California but last week it was cold so were they in California?

Becca rides camels with Colton on a date and that’s all there is to say about the date.

Back at the house, David is trolling Jordan yet again because he doesn’t have anything of value to say on is own. David is discussing what it’s like to get the next to last rose and even though he was next to last, he feels he can demean Jordan by asking what its like to be last. Jordan says it was a few seconds from how David was feeling being next to last. David: “What looks were you giving?” He’s talking about modeling looks. I think the term is overused, but David is a basic bully.

Everyone is on the group date except Jordan, David and Colton. Don’t worry, there is a musical guest on this episode- Wayne Newton. No disrespect to Wayne Newton, but please explain why there has to be a musical guest. The challenge is that they all have to write a love song to the tune of “Donke Shoen.” The twist is they must perform it in front of a live audience. They all sound bad, except Chris really kills it with the performance and boy does it blow his head up.

Back at the house, Chris hangs back and doesn’t try to talk to Becca trying to be last. I guess he was thinking he wouldn’t have to try because he had earned a leg up with the performance, but he was proved wrong when Becca approached the group and said she was leaving. This is where it gets good.

Missing his opportunity to talk to Becca sends Chris into a tailspin. He feels embarrassed because his plan backfires and he did well in the competition yet was not elevated in status in the competition. I am glad he was not put on a pedestal simply for performing well because this shouldn’t be a performance-based competition or a competition at all; it should be about organic connections. Chris is hurt and says he should just go home if Becca doesn’t care enough to make sure she speaks to him. The guys try to encourage him, but I agree with his assessment. His attitude is childish but given the fact that while he was sitting around trying to be cool she was expressing mutual feelings for Blake who is falling in love with her, he’s is correct.

Leading up to the date you see David antagonizing and Jordan responding. Colton tells them they are like “rams with big ole horns. If you do this [butts heads], both of you will fall off the mountain.” And there is foreshadowing for you.

The two-on-one goes as you would expect. David tells Becca how Jordan is a bad guy. When has the person who narrative is crying that another person isn’t “right reason” ever been rewarded? David takes it to another level. He says that Jordan told them about all the girls he could have in the casino and suggests Jordan sees Becca as settling. Becca confronts Jordan about saying he was settling for her. And in turn, Jordan yells at David about those exact words. You know someone is steeping in lies when they don’t even pick up on the fact their words have been twisted. He didn’t tell Becca Jordan said that, he told her he thought Jordan felt like he was settling. Of course, Becca eventually addresses the verbiage issue with both of them and David says the word “settling” came up at some point in the conversation.

At one point Jordan says to David “You’re uninspiring; you lack integrity, passion, charisma, your own personality!” And the opposite of those reasons is why I like Jordan. Even though he isn’t fitting in with the group, he’s being himself. True to the fact he’s kind of vain, he doesn’t misrepresent who he is for the sake of being liked, and he’s so secure he doesn’t need to focus on the flaws of others.

David is sent home, but Jordan isn’t given the rose. On the date, Jordan does what he does best, talks about himself and his life because he knows it’s interesting. But at one point he does find a way to kiss Becca. This showed me he is truly interested in Becca but the fact she laughed after showed me Becca was not interested in him. During the two-on-one portion of the date, he let Becca know he’s loyal because he watched his dad take care of his mom suffering from mental illness for 25 years. At that point it seems like there was more to Jordan, but on the date portion, he couldn’t connect on that deeper level. Maybe he is a surface level person as a coping mechanism for his home life, but it ultimately got him sent home.

Off the bat, Becca asks to see Chris at the cocktail party. He tries to play off the fact he was acting big and bad by saying he was sorry they didn’t get to talk. Becca let him know that’s why she pulled him aside and confronted him about saying he didn’t want to be there. He tried his best to make it sound like he wanted to remove himself from the competition if she wasn’t feeling him, but he really wanted to remove himself because she didn’t validate him. She left the scene in frustration leaving Chris to realize he’s about to wrap up his visit to Nevada.

Realizing the precariousness of his position on the show, he decides to give the situation some fight. He goes to “steal” Becca from Wills and she declines saying they had just sat down. Has anyone ever said no to being stolen? You can tell she was irritated. Wills eventually agrees to give Chris two minutes. When Wills returns, Chris hasn’t made any progress, but Wills tell him “time’s up, my guy,” and doesn’t budge and that statement. You can see Chris’s desperation. Becca promises to speak with him later.

Inside, Chris tries to have a bone to pick with Wills for not supporting him in his desperate attempt to get back into Becca’s good graces. A few other men try to express that they do not agree with Chris but he keeps cutting them off and tells them the are playing victims. Despite the shenanigans, Chris receives a rose. As fun as he was, John goes home.

This site uses Akismet to reduce spam. Learn how your comment data is processed. 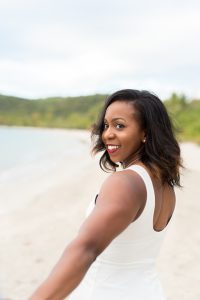 Brianna is a former Army Wife and currently a wife, mom, and content creator. Her writing is known for its candor, humor and honesty. Now she writes to inspire and encourage new wives in their growth with the military.